“The Stigmata of Miramont Castle” is the third of several Colorado-based short stories written by local authors we’ll be publishing on the Denver Horror Collective website and in The Epitaph newsletter, as a lead-up to the fall release of Terror at 5280′, our local horror fiction anthology. 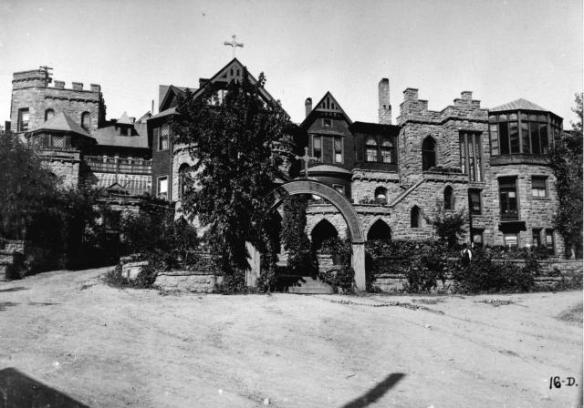 The Stigmata of Miramont Castle

The octagonal room boomed with unseen forces. It reeked of rotten wood and stale incense. The wallpaper was a light blue Fleur-de-lis pattern and had gone untouched since the castle had been built in the late 19th century. Rust lined the metal light fixtures. The pulpit was uneven and inappropriately small. A statue of Christ adorned the southern wall with first light beaming across his cheek. The chapel was the highlight of Miramont Castle.

Lucinda was Miramont’s tour guide. She was an older woman, with thick dyed black hair. Her voice was nasal, with a condescending tone. She spoke slowly and deliberately to the sole attendant of that morning’s tour.

“The room was Father Francolon’s dining hall,” she continued. “It was converted to a chapel by the Sisters of Mercy, who assumed control of the estate, after his return to France. They renamed the site ‘Montcalme’.”

“And what does that mean?” asked the elderly guest.

“Calm of the mountain,” answered Lucinda.

Lucinda excused herself from the room, as the elderly woman continued to admire the fine woodwork. She circled about the chapel, imagining herself back in time. She breathed in deeply, and the smell of the room overwhelmed her. She grabbed the pew to steady herself.

It was at this moment she became witness to the miracle. The statue of Christ came alive. The hands, feet, and chest oozed blood, pouring out the plaster statue and onto the wooden floor. The face turned to the elderly woman and smiled. Blood began to pour from his thorny crown.

The elderly woman approached the statue. She blessed herself and thanked God for bestowing this honor upon her. Emotion overwhelmed her and she nearly fainted, limping casually backwards into the chapel wall, scratching the blue wallpaper with her hand.

Lucinda rushed into the room and witnessed the stigmata. She took out her phone and snapped a few photos of the miracle at hand. She turned her attention to the elderly guest, who was on the verge of passing out.

The elderly woman cupped her face in her hands, rubbing her temples, then her eyes. Tears streamed down her face. She regained her posture and embraced the moment.

“I’ve waited my whole life for a miracle,” she said. “I can now die in peace.”

At that moment, the elderly woman went limp. She fell to the ground like an anvil, striking the creaky floor below.  She was noted to be lifeless upon impact.  Lucinda called for help, and by the time first responders arrived, the old woman was dead.